The Book in the Attic 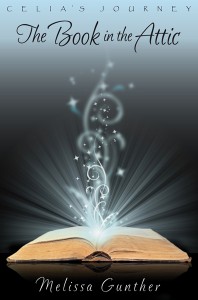 Never judge a book by its cover.

Celia Fincastle doesn’t remember her parents – they disappeared when she was almost two. No one knows what happened to them, especially Aunt Agatha, who cares only that Celia is not old enough to send off to boarding school. Celia’s not sure she wants to go, until she discovers a book in Aunt Agatha’s attic.

While it looks like a dusty old book about dull history, opening the cover reveals it’s anything but boring. A figure that literally appears from within the pages of the book introduces her to the Renasci Academy for Gifted Students, and Celia finally knows where she wants to go to school. Little does she know what awaits her…

Before she even reaches her new school, Celia learns that everyone is expecting her to be some kind of leader when she’s older, because her family was selected and she’s the only one left. But how can she be a leader when she has no idea what they’re talking about? How does she even know if she belongs at a school for gifted students? She’s never been anything special. Suddenly Celia’s extremely uncertain if she made the right decision, but there’s no going back now.

As she settles into her new school, her new life, Celia starts to believe that maybe she can finally fit in…until someone starts framing her, accusing her of causing all the trouble that’s been happening around the school. Celia knows she didn’t do it, but she can’t prove it and she’s about to be expelled. She has to figure out who’s behind the plot and stop it – fast – because there’s more at stake than she realizes…

Eleven-year-old Celia Fincastle has no idea what awaits her when she comes across a mysterious old book in the attic. Join her as she embarks on a journey full of adventure and intrigue.