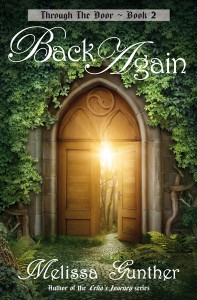 Erin Morgan thinks she’s had a fascinating dream, one inspired by the castle ruins her family is visiting while on their road trip vacation. Surely it was all so realistic because they’re staying in a bed and breakfast right next to the old castle, right? But if that’s the case, then why does she suddenly have this necklace that she doesn’t remember seeing before now? And why does her phone have a picture that looks like a ghostly image of the castle not in ruins?

Her parents are worried about her, but when Erin tries to explain, her mother thinks Erin’s just letting her imagination run wild. As Erin tries to show her mother the picture on her phone, the ruins suddenly disappear, replaced with the real thing.

Erin’s back at the castle, and she has to figure out how to get home… again. The answer might lie with the very girl Erin helped rescue her first time in Ner, but Serah’s rather stubborn brother is determined to keep Erin away from his sister. As Erin joins ranks with a couple of clever girls and an intelligent princess, she’s about to find out her own predicament is part of a much bigger picture, and there’s more to Ner than she realized.